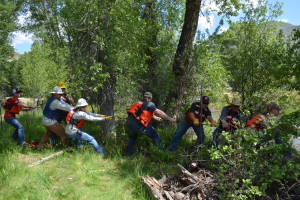 It took a couple of tries for the mass assembly of law, fire and health workers to wrangle a water-channeling boom across the raging Duchesne River in an early June deployment exercise, admitted Linda Lefler, the Duchesne area manager for the Central Utah Water Conservancy District.

“The first time, there was a lot of swift water that left us reinventing our plan,” she said. “But we regrouped and came up with a different way that worked well. We saw a different side of the picture. One thing we learned is how many people it takes to successfully make it happen.”

Hopefully, Lefler added, they’ll never have a spill to deal with on the Duchesne River. It diverts into Starvation Reservoir, which provides drinking water to more than 6,000 people in Duchesne County.

The way to effectively deal with whatever comes their way, she said, is to develop relationships between the different departments now and open the lines of communication that are vital to a quick response.

“Being on an ambulance crew, I’m used to working with police and firefighters,” said Lefler, who is also an emergency medical technician. “And we saw in last year’s handling of an oil spill on the Provo River how important it was to get an immediate alert to a spill.”

The CUWCD and other response teams received accolades for their quick action when an overturned tanker in Provo Canyon dumped 1,000 gallons of crude oil in the Provo River. “It worked because of relationships they developed,” Lefler said. “The law officials had one of our cards, and we were immediately alerted.”

The skirted containment and absorbent boom has been placed at several locations in Utah, Wasatch and Duchesne counties. Time is critical given the river’s rapid current, Lefler stressed, and the district will again work with the Duchesne County Emergency Manager and its fire and sheriff departments, the Tri-County Health Department and Chevron Pipeline employees to prepare for the day everyone hopes will never come.