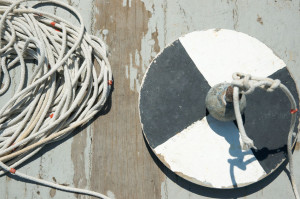 On Nov. 27, we honor the life of George C. Whipple, a man you’ve probably never heard of before, but who is a pretty big deal in the water world! Take a few minutes and take a not-at-all-boring journey back in time and learn how Mr. Whipple changed the future of water safety!

George Chandler Whipple was born in 1866 in New Hampshire. In 1889, he graduated from the Massachusetts Institute of Technology with a bachelor of science degree in civil engineering. His first two jobs were with water utilities, and while working at these jobs, he gathered enough information to write a book called The Microscopy of Drinking Water.

This book was the first of its kind. It was centered around identifying the microscopic aquatic organisms that exist in drinking water. There was something else pretty notable in the book about the Secchi disk.

For those who don’t know (which is probably all of you), the Secchi disk was created in 1865 by a man named Angelo Secchi. It looked like a plain white frisbee, and it was used to measure turbidity, aka how transparent a water source is due to the presence of particulates. The disk, which is mounted on a pole, gets lowered slowly down in the water, and the depth at which you can no longer see the disk is the measure of the transparency of the water.

In his book, Whipple suggested that the Secchi disk should be modified. He wanted to make it a little smaller (8 inches in diameter instead of 12 inches) and rather than all white, he wanted it to be divided into four sections and painted alternately black and white. This black and white Secchi disk is actually the version we still use to measure fresh water turbidity today!

George C. Whipple opened a consulting firm in 1904 in New York City, where he worked directly with the Portland, Maine, Water District and the City of Pittsburgh, and served as an expert witness in several important trials on the topic of water chlorination.

In 1911, George was appointed Gordon McKay Professor of Sanitary Engineering at Harvard University, where he remained until his death. Even though he only had a bachelor’s degree, his expertise on the subject made him the ideal candidate for the job. In 1913, he founded the School of Public Health, which later become known as the Harvard School of Public Health.

Even though he died on Nov. 27, 1924, his legacy lives on today. In fact, we still use the Secchi disk he designed all the time when we go out and test water quality on our reservoirs!