DACRWTP breaks its own record! 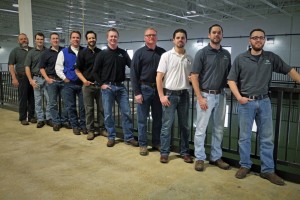 Already nationally recognized for producing some of the best water in the nation through AWWA’s Partnership for Safe Water program, the CUWCD’s Don A. Christiansen Regional Water Treatment Plant has outdone itself.

On Monday, Dec 18, the plant had recorded 2,781 consecutive days of reaching its goal of a finished water quality below 0.10 NTU (nephelometric turbidity units). Turbidity is the haze caused by particles in water. The federal standard for drinking water is 1.0 NTU, though it also demands a reading of 0.3 NTU at least 95 percent of the time. DACWTP just set the bar a little higher! 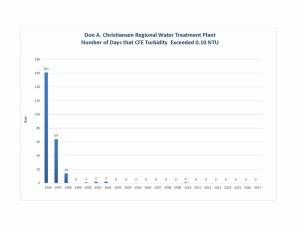 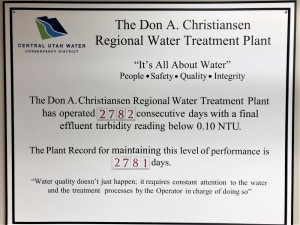 David Hardy says that the key to this level of sustained performance has been achieved by following a “simple recipe” – “It begins and ends with people – we hire excellent people – set stringent performance goals – and provide continuous (weekly) training to those people to ensure they have the knowledge skills and abilities to achieve those goals.”

Part of achieving success is setting goals. In 1997, the plant set a goal to maintain finished water quality below 0.10 NTU 100% of the time. From 2003 to February 3, 2010 – “Black Wednesday,” as the plant refers to it – the plant had recorded 2,781 consecutive days without exceeding their goal. The goal reset and so did the number on the board.

Each night at midnight, if the goal is achieved, a magnetic number on the “goal board” is replaced. Also tracked is the greatest number of consecutive days the plant has gone without exceeding this goal.

Congratulations to the staff at the Don A. Christiansen Regional Water Treatment plant for crossing this milestone and taking so serious their charge to protect public health on a continuous basis!