Don’t throw that food away! 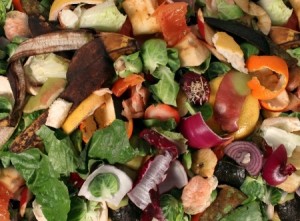 By now, you’ve likely seen roadside stands selling the freshest fruits of the season like juicy red tomatoes, and shiny green peppers. Maybe you’ve even stopped at the local farmers market for some corn on the cob, zucchini, and ripe watermelons.

If you’re really lucky, you even have a handy source of fresh eggs, straight from the hen house.

And if you’re like many of us, your eyes are bigger than your family’s appetite. How many times do you end up throwing away that last soft tomato or lettuce that’s started turning brown around the edges?

We have the best of intentions and unfortunately, we’re far from alone. According to SaveTheFood.com, Americans waste 40 percent of the food we buy.

What you might not know is how many gallons of water you’re throwing down the drain when you add to the 133 billion pounds of food Americans take to the landfill every year. And we won’t even talk about the methane gas its sending into the environment.

It has reached the point where the U.S. Department of Agriculture and the Environmental Protection Agency are calling for a 50 percent reduction in food waste by 2030.

Here’s an idea of what you’re wasting: