Floods are a concern during the Utah runoff season 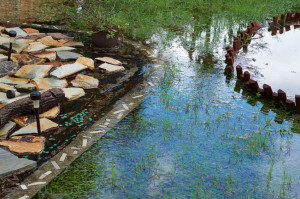 Runoff season has started here in Utah, which means it’s the perfect time to discuss flooding. Utah’s unique (and beautiful) mix of both dense urban areas and natural geography makes it especially susceptible to flooding.

There have been many significant floods in the state’s history, such as the Santa Clara River Flood of 2005 and the Thistle Landslide and Flood of 1983, which resulted in a major landslide that caused one fatality and over $200 million in damages.

This year, we’re especially concerned about the danger of flooding in the communities downstream from the Pole Creek Fire and Bald Mountain Fire sites. You might not think floods and wildfires are correlated in any way, but there’s actually a few key ways these large fires can lead to flooding.

First, vegetation that normally absorbs rainwater is destroyed in a wildfire, creating a layer of ash and charred soil. This acts as a barrier and prevents water from being absorbed into the ground. Instead, the rainwater flows down, increasing the risk of flooding in areas of lower elevation. It is recommended that homeowners in these areas maintain a flood insurance policy for at least three to five years following a wildfire, though it is a good idea to have coverage all the time to be fully protected.

Keep important documents in a water-proof safe and don’t allow friends or family members to sleep in the basement during a storm, especially if there is a chance of a flash flood. If water does enter your home, head to an upper level (the attic or roof is safest if you have a single story home). If you do leave your house, don’t walk through flooded areas. Surprisingly, it only takes six inches of moving water to knock an adult off their feet.

The truth is, flooding can happen anywhere in Utah, and unfortunately, 97% of Utahns don’t have flood insurance. If you’re a homeowner with a 30-year mortgage, you are more likely to experience a flood than a fire. Shocking, right? Yet, most homeowner’s insurance policies do not include flood coverage. The Division of Emergency Management’s website is a great place for Utahns to go to get a quote on flood insurance.

To learn more about flood preparedness, you can visit BeReadyUtah.gov or follow CUWCD on social media for timely reminders, tips, and updates about the present and future states of Utah’s water supply.