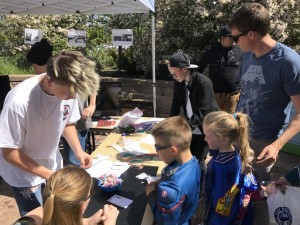 The sun wasn’t the only thing shining at the Central Utah Water Conservancy District’s Water Festival at Central Utah Gardens in May.

On hand to share their innovative efforts in desalination, robotic sprinkler sensors and more water-efficient faucets were ninth-graders from American Fork Junior High School. It capped a year-long, multi-discipline project in cooperation with Central Utah Water Conservancy District and Vivint.

“It feels really good,” said Joanne Diaz from the desalination team. “Since working on this project, I realize we can change the world.”

Using heat and steam, said Will Harris, “we were able to separate a large number of the salt particles from the water.”
Ocean water contains about 35,000 particles per million, and the team brought it down to 100 in the finished product.

“Our original budget was $495, but we found some other ways to do it and brought it down to $100,” said Russell Gray, addressing the high cost that sidelines most desalination solutions. “This is something small communities could use, using it to get drinking water from the Great Salt Lake.”

It was all very interesting, said Elani Sesions.

“We used a refrigerator and then came up with another plan and another plan,” she said. “We were working very hard, trying to be more efficient.”

“I didn’t know the water issue as so huge,” said Hannah Weight. “We have a world full of water, but we don’t really have that much usable water. Think of the good that can come from this!”

The students were dealing with things beyond their teachers’ knowledge, said English teacher Matt Strock.

“I couldn’t even fathom it,” he said. “But I saw some who had struggled in past years really grow when they saw the value and potential of their efforts. One who last year would maybe write one line in an assignment is now writing 12 paragraphs and only stopping because he ran out of room. And this is coming out in all subjects, across the board. They blew us away.”

It was hit-and-miss in the beginning, admitted Jordan Cox, when his team began working on the cyborg sprinkler system.

“None of us had background in computers or anything,” he said.

But now, they have future goals, said Joseph Brandow, adding “we’ve fallen in love with all of this. Stuff started climbing and we want to get it down.”

“We had no clue what to expect,” said Cameron Carroll. “But it was awesome. We were creating something that will make life better.”

It was the bigger picture that caught Damien Hargett’s interest. “We don’t have a lot of fresh water,” she said. “It’s really salty or contaminated by algae blooms. And there’s a lot of water waste. If we come up with a sprinkler system that cuts out over-watering, we’re really helping people keep healthy.”

The festival lets them shine for a moment, she said. That, along with what they’ve learned in the process, has helped them believe they’re capable of great things.
“We started out with a challenge and it became personal. They reached into the community, and the mentors bridged the gap, giving them a great depth of knowledge.”

“Joseph is looking at taking college courses during high school now and graduating early,” said Joseph’s mother, Heather Peterson. “He’s brilliant, but he had no self-confidence. This has been life-changing.”

Even when the project didn’t turn out as planned, the students took valuable lessons home from the experience.

“The 3-D printer isn’t really as easy as it seems,” said Joel Edwards.

“It was so hard to us, transferring files to just get it to print,” said Byran Lucas, adding, “It’s very methodic.”

“It was trial and error, and we haven’t figured it out yet,” said Halli Wing. “But we’re closer to the final product.”

“The big message is that every drop does count,” Byran Lucas said.

“And every idea, even if it seems insignificant, contributes to the solution,” added Joseph Brandow.

“This is what we’re looking for in the future, people who come up with innovative ideas,” said Monica Hoyt, the public outreach coordinator at CUWCD and mentor of the desalination team. “They’re grown by leaps and bounds. They should be very proud of their amazing efforts.” 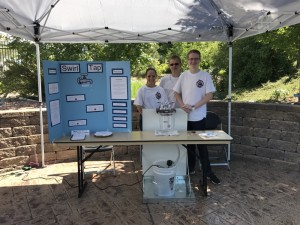 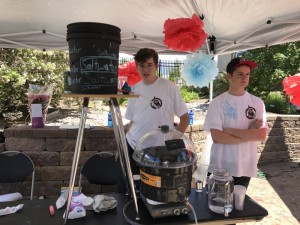