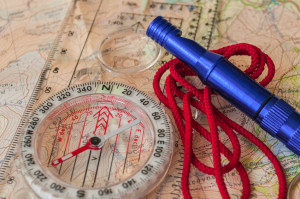 When the Central Utah Water Conservancy District was called forward again and again during this fall’s AWWA Intermountain Section Conference, “it was a little embarrassing,” said Jared Hansen, project manager at the district.

Then they called his name, recognizing his work as commander of the Utah County Sheriff Search and Rescue with the 2017 Distinguished Public Service Award.

“I was shocked; I couldn’t process what I was hearing,” he said. “It completely caught me off guard.”

That’s saying a lot for someone whose community work leaves him prepared for just about anything that comes his way. A couple times a week, his team members are called out to search for climbers, track down a wandering Boy Scout or come to the rescue at Utah Lake and the Provo River.

“It’s pretty rewarding,” said Hansen, who joined the search-and-rescue team in 2012 and has served as commander for nearly eight years. “About two-thirds of our members have 10 years-plus with us. If you like it, you stick with it.”

By large, they’re called to rescue, he said, but no matter what is required, they’re prepared.

“When you’re searching for people who are lost, even to the point where some have died, it’s a feeling that you don’t really understand until you’ve gone through it yourself. Even if they’re gone, you’ve respectfully brought them back to their family, giving them proper closure.”

Not every call brings an adrenaline rush, he added, especially if as commander, he’s done his job right in preparing his team and making sure they’re well-equipped for the task at hand.

“I work hard to make it boring,” he said with a laugh. “But there’s a lot of heartbreak, too. It’s not for everyone.”

Hansen appreciates the support the CUWCD management gives him and others in the district, encouraging them to reach out in their communities. And the relationships he’s developed with the sheriff’s department and others in search-and-rescue have served him well when something comes up at the district.

“I already know the people responding to our call,” he said. “And I’ve had enough exposure to emergency situations that my heart rate isn’t racing. I can calmly assess the situation and that makes a ton of difference, especially when it’s not a stressful life-and-death matter.”

Now if he can just handle the spotlight! Of course, Hansen was in good company at the AWWA conference as others from CUWCD were recognized several times through the night:

• Gerard Yates, the water quality manager at CUWCD, received the 2017 George Warren Fuller Award, given to those showing outstanding leadership and/or making a significant contribution toward advancing the water works practice.

• Monica Hoyt, the district’s education and outreach manager, was elected the second trustee on the Board Executive Committee.