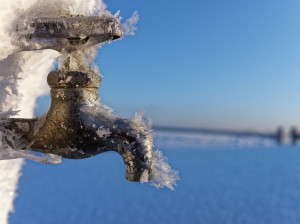 Even though we’re not watering lawns or gardens in the winter, Americans still consume 70 gallons of water every day for drinking, washing, cooking and other indoor purposes. As the second-driest state in the union, Utah knows that water conservation is important all year round.

Water pipes, particularly in the basement, can be prone to freezing during cold snaps. Frozen pipes can burst, which wastes a lot of water and can mean a major clean-up job for you. Insulate pipes near the outer walls.

If you have pipes that are prone to freezing, leave the tap open just enough for a trickle of water to flow through the pipe. This can prevent the pipes from freezing completely and bursting.

You can also insulate your hot water pipes in the house. When the temperature outside drops, your pipes get cold, too, which means you have to run the water longer before it’s warm enough for a shower. Insulating your hot water pipes will reduce the amount of water you waste for every shower.

Clear leaves, branches and other debris from your gutters and downspouts before the first snow falls. Otherwise, they will fill with water, which will then freeze and can lead to damage.

Check faucets, shower heads, bathtubs, sinks and toilets for leaks. Even a couple of drops every minute add up to hundreds of gallons over time. Replace all worn-out washers, or replace old faucets with washer-less models.

Leaking toilet flappers and gaskets drain water from the tank into the bowl. Flushing sounds when no one is in the bathroom can indicate a flapper that needs to be replaced. This repair will cost you less than five dollars, and will save many times that in a month.

Reduce water consumption in the house

Less water use means better water conservation. When you have to replace toilets, faucets and shower heads, move to low-flow models. They’ll quickly pay for themselves in water savings.

You can also replace your hot water tank with an instant hot water recirculating system or a tankless hot water system. These systems deliver hot water as soon as you turn on the faucet, so you don’t waste water waiting for the shower to heat up. Americans waste thousands of dollars and also thousands of gallons of water every year this way.

For a low-tech, alternative, put a bucket in the shower to collect cold water and use it to water your indoor plants.

There’s always a big clean-up after a holiday meal or party, and that consumes a lot of water.

Dishwashers consume less water than washing by hand. You can also save water by scraping leftovers into the compost, rather than rinsing the dishes.

Run the dishwasher only when it’s full. By the same token, wash only full loads of laundry to maximize your water conservation.

If you don’t use a dishwasher, for better water conservation wash all the dishes at once, and rinse them all at once when you’ve finished washing.

Turn off the tap while brushing your teeth.

We still use a lot of water in the winter. Make a few simple changes in daily behavior, and fixing leaks, can add up to significant water savings.