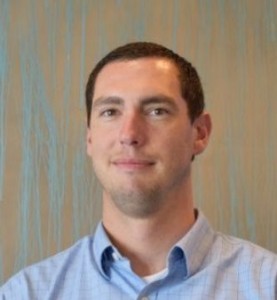 We have a new face at the Central Utah Water Conservancy District, and with it comes a renewed commitment to water conservation.

During one of Richard Maloy’s first projects as the district’s water conservation coordinator, he will interact in a big way with his fellow Utahns. Stay tuned for news of the district’s returning EPA WaterSense-labeled sprinkler controller rebate program. It will be the focus of a huge email campaign led by Maloy, who will stay true to his focus of connecting with and educating the public on the district’s water issues.

“We’re a resource, and our focus in the next year is on education and outreach,” said Maloy, a Salt Lake City native who earned a degree in psychology at Utah State University while working in the water industry. He is now attending business school.

“We want to offer more classes. We want to create a frame of mind where, if you want transform your landscape or fix a leak, you know where to come. We’re going to take the information we have and repackage it in a way that resonates with different kinds of people,” he said.

Although Maloy has always felt a connection to the water industry, he had no interest in becoming a civil engineer. But that changed after working in South Jordan before he came to CUWCD. “I’ve found my psychology studies are very effective in getting people engaged in our water conservation efforts.”

As he learns more about CUWCD’s operations, he’s just as determined to tell the district’s story. He recently joined coworkers as they checked out American Fork Junior High students’ proposed solutions to Utah’s water issues.

He’s on the job, whether it happens through live streaming of educational programs, increasing social media exposure or tweaking events such as the Picture This! photo calendar contest. It really comes down to addressing what people care about, Maloy said. Their top priority isn’t saving money.

“They want to know how we can make their life better,” he said. “They’re thinking about the environment. Right now, it’s about communication.”

He’s hopeful CUWCD can increase participation through greater awareness of conservation methods in the future. “We’ll keep putting the content out there and see where it goes,” Maloy said.