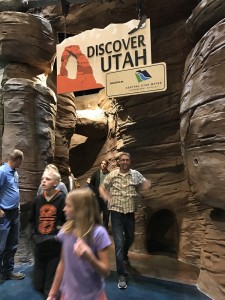 On Sept. 23, our Central Utah Water Conservancy District’s staff and their families arrived in great numbers, with children and grandchildren in tow coming to what they thought was a wonderful day at the Loveland Living Planet Aquarium in Draper.

But they were in for a big surprise – the night turned into a celebration of CUWCD’s continuing outreach and education alliance with the aquarium, including an acknowledgement of the district’s support by renaming its “Discover Utah!” exhibit.

“It was huge; more people showed up than ever before,” said CUWCD Education and Outreach Director Monica Hoyt. “The announcement recognized a long tradition that developed before the aquarium was even a glint in someone’s eye.”

The aquarium has really become an integral part of the community, “especially in an inland state like Utah,” said CUWCD Assistant General Manager Christine Finlinson. Before the current park opened on March 23, 2014, it was housed in a revamped craft store, “and prior to that, there was a miniature aquarium in Downtown Salt Lake City,” Finlinson said.

That was about the time the district approached Brent Anderson about creating a partnership that became the Utah Waters Van, educating local fourth-graders about the water cycle, wetland ecosystems and water conservation, using demonstrations, experiments and live animals.

“We are here tonight to celebrate this relationship and to announce the next phase of this partnership. We are working with the aquarium to make YouTube videos that educators can use to help give Utah specific water lessons to our children.”

Among the plans, Anderson said, are vodcasts that open the topics spread by the Utah Waters Van to an even wider audience, a game engine that allows the aquarium to create a video wetland and pond where users can adjust the population and other factors and monitor the resulting changes, and a new science learning center at the aquarium that will include an outdoor stream and other water-conservation stations.

“It’s crucially important to serve the largest number of students and through experience bring the water conservation curriculum into focus,” Anderson said. “The district has played a huge role in that for years, in outreach and in allowing us to branch out in other areas.”

It is critical, he said, for Utahns to recognize smart ways to conserve water and also ways to be yet developed.

“We are starting to build on these ideas right now,” he said.

As for the CUWCD, “it’s always been part of our mission to educate the people of Utah and that’s what we’ve done with the aquarium’s help, starting with fourth graders,” Finlinson added.

It all comes back to the district’s ongoing stewardship of its part of Utah’s environment, Hoyt said.

“It’s something we’re going to continue for many more years, not just with our continued financial support but with increased man-hours. It’s a source we want to tap.”