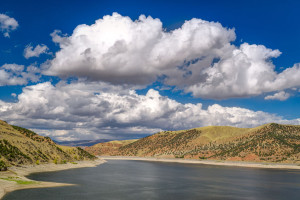 Have you had a chance to read Central Utah Water Conservancy District’s 2017 annual report yet?

It looks back at a year of plenty – a near-record-breaking snowpack, for starters – and with its analysis of our safe and secure water supply, sets high standards for what comes through your tap today. When the Don A. Christiansen Regional Water Treatment Plant holds its finished water below 0.10 percent NTU (Nephelometric Turbidity Unit) 100 percent of the time for more than 2,800 consecutive days, you know we’re doing something right.

But the real challenge, familiar to any following the water industry in Utah, is clear in General Manager Gene Shawcroft’s opening message. How do we prepare for what lies ahead?

The year included the launch of The Wells@Vineyard – drilling new wells tapping the source that won best drinking water honors in 2015 and 2016 – and progression on the replacement of the Olmsted Hydroelectric Power Plant, “important projects similar to what we’ve undertaken before,” said Gerard Yates, our water quality and treatment department manager.

Providing for a population expected to double by 2065 is a challenge “we accept willingly,” Shawcroft wrote in his introduction. “Solutions, some easy, but most not,” includes water conservation and new water project development, building new infrastructure and replacing old, and more requiring “the collective strategies and imaginations of both staff and trustees alike.”

By hiring well and training well, the district has a workforce committed to the task at hand, Yates said. It’s evident in the annual report, the synopsis of its many departments celebrating great strides in safety and finances, thousands of people reached by its education outreach and Central Utah Gardens, and awards recognizing superior efforts, at work and in the community. Environmentally speaking, one of the most successful pursuits was bringing the June sucker back from the brink of extinction through the June Sucker Recovery Implementation Program.

Together, it creates a foundation that, when the snowpack falters as it did in 2018, prevents the resulting drought from turning into a crisis, as Shawcroft explains in an op-ed piece in the Deseret News.

For the record, CUWCD did not compete for the best-tasting drinking water in 2017. No wells were running for the required sample, “and we would spend thousands of dollars to start a well just to compete,” Yates said.

That sense of stewardship has paid off. The district is very fortunate, Yates said, to have the resources to do their job. It’s not unlimited, he added with a chuckle, but it covers what is necessary to continue to meet the district’s goals and objectives. An important part of that is protecting the public’s health, a job they do well given water testing that routinely meets and exceeds state and federal standards.

Now, through programs such as citizen scientists and forays into the district’s classrooms, it’s a matter of engaging the public in securing a ready supply in the future.

“This isn’t something we just woke up and discovered,” Yates said. “We’re continuing to do what we’ve always been doing very well. The report officially spells out future challenges and opportunities for a growing Utah. Now it’s a matter of leadership, sharing our vision and effectively preparing our staff, educating them in what it will take to carry on the work we’ve started by providing them with the resources and training they’ll need to be successful.”