The biggest water treatment plants in the world 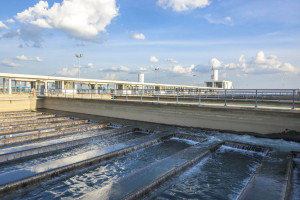 Supplying water is just one part of our job at the Central Utah Water Conservancy District. Treating wastewater so that it can be returned to the environment safely is an equally important element of what we do.

A water treatment plant takes water after it’s been used in households, farms and industry, and removes contaminants and elements that are not healthy for humans or the environment, then returns it to a body of water so it can be used for drinking, irrigation, industry and recreation.

Which water treatment plant is biggest?

More than one water treatment plant claims to be the largest in the world, including several in the United States and around the world.

The Detroit Wastewater Treatment Plant has a wet-weather capacity of 1.7 billion gallons per day, the largest in the U.S. However, the Deere Island Sewage Treatment Plant in Boston rates as the largest in the world in terms of primary and secondary effluent treatment. Its wet-weather capacity is 1.2 billion gallons per day, and it also produces 3 megawatts of electricity as well as 75 tons of fertilizer pellets every day.

The James W. Jardine Water Purification Plant inChicago, Ill. also claims to be the largest in the world, with a capacity of nearly 1 billion gallons of water per day. Jutting into Lake Michigan, it serves the city of Chicago as well as 118 surrounding communities.

In true Texan style, the city of Houston broke ground on a new water purification facility in September 2017. When it’s done, the city claims its Northeastern Water Purification Plant Expansion will be the largest on the planet. It will draw water from Lake Houston and pump up to 320 million gallons per day through 17 miles of pipes large enough to drive a car through.

With a capacity two-thirds that of Detroit’s water treatment plant, Washington D.C.’s Blue Plains is the largest advanced wastewater treatment plant in the world. It’s called “advanced” because in addition to cleaning the waste water from households, industries and agriculture, it also uses the biological nitrogen removal process. This process reduces nitrogen and phosphorus discharge, which deplete oxygen and cause algae blooms in waterways that treated effluent is discharged into.

Since 2000, Blue Plains has reduced nitrogen output by 40 percent every year. Blue Plains also generates 200,000 tons every year of high-quality sludge for soil amendments, as well as 10 megawatts of electricity.

In terms of area covered, the largest in the world is the Western Treatment Plant in Melbourne, Australia. It covers 42 square miles.

In terms of capacity, the Jean-R-Marcotte Wastewater Treatment Plant in Montreal, Quebec, Canada is the largest in the world. When a secondary treatment plant comes on line later this year, its wet-weather capacity will be 7.6 million cubic meters of water per day, or more than 2 billion gallons.

Water for today and tomorrow

Growing populations in growing communities everywhere need more water. At the same time, there are increasing demands for water treatment that is more sustainable for the planet. That’s the reason that water treatment plants are getting larger and larger, and pushing the development of new, cleaner and greener technologies.

Utah is no exception: the state’s population is projected to double between 2020 and 2060. That means our water resource development, delivery and conservation efforts have to grow, as well. The Central Utah Water Development Project, when it’s complete, will add about 63,800 acre-feet, or over 20 million gallons of water every year for communities in northern Utah and southern Salt Lake counties.

It’s just one example of the initiatives we’re taking to ensure that our residents, farms and industries continue to have reliable, clean and safe water. Adding an increased capacity of water will also mean a greater capacity needed for treating the wastewater. Visit our Prep60 website to find out more about our plans for the future.