You want to build what? 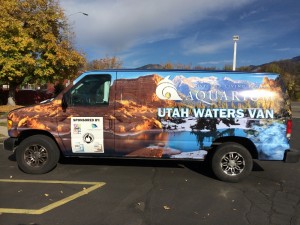 The ‘90′s were winding down and no one could understand why Sandy, Utah native Brent V. Andersen, raised in the desert, far from any ocean, had his mind set on building an aquarium.

“It took a little while to catch on,” he said, laughing at the memory. “But the focus was always on educating people about the global ecosystem, and from the start, Christine Finlinson (an assistant general manager at Central Utah Water Conservancy District) was very supportive, even when we were hardly more than a storefront.”

Fast-forward to 2018 and his dream – Draper’s Loveland Living Planet Aquarium – is 136,000 square feet of exhibits, educational centers, a 4D theater, community rooms and an interactive computer eco-system. While that’s considerably larger than the 100,000-square feet its founder and CEO envisioned from the start, Andersen, who holds a degree in marine biology from the University of California – Santa Barbara, isn’t stopping there. Coming yet is an 80,000-square-foot science learning center featuring high-tech labs and classrooms exploring a variety of sciences.

And even today, the aquarium’s most successful venture is the education program that launched it all in 1999, a van outfitted with exhibits that took his love of marine life to schoolchildren around Utah. Today, three educational vans – the Rainforest Van, the Utah Waters Van (co-sponsored by CUWCD), and the Ecosystems Van – visited nearly 90,000 Utah second, fourth and sixth graders. It’s free to the schools and in addition to the aquarium’s on-site programs and teacher development workshops.

Water stewardship is important to the operation as well. The Loveland Living Planet Aquarium roughly uses the same amount of water as a 140-room hotel, Andersen said, with most going to flush toilets, prepare concession foods and irrigate the landscape. The water habitat needed for the animals, representing freshwater, saltwater, and rainforest species, is recycled several times, according to their different needs before leaving the facility.

“Our number one goal is educating the public about how our ecosystem works and what we need to do to preserve it through water conservation,” Andersen said. “We need to be good stewards and use our water wisely.”

And, oh, yeah, he said, no one’s calling his dream a bad idea anymore.